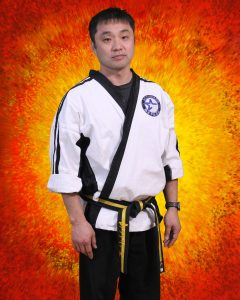 Born in South Korea and raised in the city of Seoul, I began my training in Taekwondo at the age of 9, under the watchful eye of Grand Master Kim. 1st Dan Black Belt evaluation took place at Kukiwon, The World Taekwondo Headquarters, where I earned my 1st Dan black belt at the age of 12. I started teaching Taekwondo to others at the age of 19 and have enjoyed it ever since. I currently have over 30 years of martial arts experience.