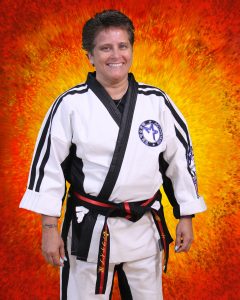 Martial Arts: I began taking lessons in 2006 strictly as a means to rehab my knee after tearing my ACL in 2005. I also wanted to share something with both of my kids.  In 2010, I was awarded my Black Belt. I currently hold the rank of first degree Black Belt and the form I teach is based on Shotokan.  I’ve been teaching since August of 2010 for ACTIVSTARS – teaching all the way from the beginner level through the advanced ranks.   I truly enjoy the opportunity I’ve been given to work with the kids.

About me: I grew up in central Wisconsin and call it home…even to this day. I “transplanted” myself in Kansas City after graduating with my Masters from the University of Wisconsin-Stout. Now work full time as the Executive Assistant to the General Manager of Sales for a local beverage distributor. I’ve been at my current job since 2001, and love that job almost as much as I love teaching the kids!

When I’m not teaching, I play on a women’s competitive softball team, and recently got back into playing competitive volleyball. I’ve been playing both sports since junior high and love that my daughter has inherited my competitiveness and now plays volleyball, as well. I’ve coached various sports over the years, so when ACTIVSTARS approached me concerning an instructor’s position, it seemed to be the perfect path for me in the martial arts.

I have two children – a daughter, Casey (16), and a son, Austin (21). Both participated in ACTIVSTARS karate for several years. Casey traded her sparring gear for a volleyball and knee pads and plays for a local club and for school and my son works full time. It’s hard to believe they started karate when they were just 4 and 7, respectively!