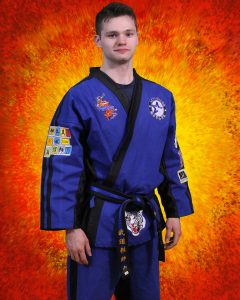 My name is Sensei Dylan Knoll, and I have been with ACTIVSTARS and under the instruction of Renshi Dave Elam since 2000. I grew up through the ACTIVSTARS Karate program and earned my 1st Dan Black Belt in Karate. I have achieved my 3rd Dan in Ninjutsu under 6th Dan David Wilkinson and 4th Dan Dave Elam. Through the guidance and training under Hanshi Colby Lalli and Renshi Dave Elam, I’ve earned my 2nd Dan in Karate.

I have a passion for learning Martial Arts and I enjoy sharing my knowledge with others even more. I believe that the teacher learns more from the student, than the student learns from the teacher. I have also received training in various other styles of Martial Arts for; grappling, throwing, pressure points, weapons, and I have had instruction from one of the Shaolin Monks from the Shaolin Temple, Shi Yang Qing.

My goal as an ACTIVSTARS instructor, is to teach children about stranger danger, learn to protect themselves, and have fun doing it! I am a D.A.R.E. graduate and was awarded the President’s Lifetime Achievement Award in High School.

I have also had the honor and privilege of meeting and learning from Master Hollingworth and being able to work with great instructors such as Hanshi Colby Lalli, the Midwest Karate Supervisor, Hanshi Se Han Kim, Kyoshi Ray Wright, Renshi Mike Tope, Renshi Mark Theiss and many other amazing instructors.