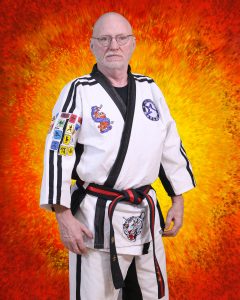 In 1962, I started on my Martial Arts life path in Jujitsu and Judo, under 4th Dan, Bill Elam.  I trained with my father, Art Elam Sr. in boxing. I boxed and wrestled throughout my years of school. I am a United States Marine Corps Force Recon Veteran.  While in the Marine Corps, I trained in Aikido and also instructed soldiers in Marine Hand-to-Hand Combat.

I have also earned my 3rd Dan in Ninjitsu under 6th Dan, David Wilkinson.  In 1995, I had the great fortune to be introduced to and train under Master Hollingworth.  I started teaching for ACTIVSTARS in 1997. I have also had the pleasure to work with Hanshi Colby Lalli, the Karate Supervisor for the Midwest Region, Hanshi SeHan Kim, and many other great instructors.