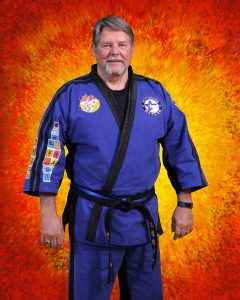 PROFILE/BACKGROUND/EXPERIENCE:  I began my professional study of Karate in 1967 at Ball State University under Bill (Superfoot) Wallace.  After graduation, I continued to be active in the arts of self-defense over the next few years as a high school wrestling coach.  I continued my formal karate training in the Shorin- Ryu system under Sensei Sabah Saud at the Parker Shelton Karate School in Ft. Wayne, IN.  While training under Sensei Saud, I was elected President of the school’s Black Belt Federation.  However, business called once again and I had to relocate to Chicago, IL.  While in Chicago I continued my study in martial arts, only this time in Taekwondo under Master Richard Temmerman (5th Dan) at Midtown Martial Arts.  I earned my Shodan in July, 1995 and was voted “Most Improved Black Belt” in October that same year. I was promoted to 2nd Degree Black Belt in June, 1997.  I was one of the schools instructors, working with children from ages 5-12.  I continued to train to improve my martial arts knowledge by training in the arts of Modern Arnis with Remy Presis, Small Circle Jiu-Jitsu at seminars with Wally “J” and Gracie Jiu-Jitsu at special training sessions held at Midtown Martial Arts with members of the Gracie family.

Once again my company had me relocate.  This time I was fortunate enough to continue my study of Karate, in the Shorei-Goju-Ryu system with Hanshi Herb Johnson an old college friend I studied with under Bill Wallace.  I trained and taught at Mr. Johnson’s schools for the next few years, helping many karate-ka earn their first black belts and earning the title of Sensei.   In recognition of my continued study and desire to give back to the Martial Arts; Master Herb Johnson, 9th Dan promoted me to 4th Dan in Shorei-Goju-Ryu, in June, 2010. I was also recognized as a Gold Member of the United Shorei-Goju-Ryu America.

In February, 2013 a career change required me to relocate to the greater St. Louis area.  I immediately began seeking a martial arts program so I could continue training.  That style was Uechi-Ryu, a style based on both Chinese and Okinawan tradition.  I continue to train under Sensei Kirby Diller, 6th Degree Black Belt, Renshi –Rokudan.  I travelled to Okinawa, Japan in July, 2019.  I tested and was promoted to 1st Degree Black Belt, Sho-Dan in front of the Uechi Ryu Kenyukai review board on July 26, 2019.

I joined the ranks of ACTIVSTARS in September, 2017.  I wanted the opportunity to give back to others what Karate has done for me.  The ACTIVSTARS program does just that.  ACTIVSTARS will allow me to pursue my passion of teaching and sharing my martial arts background with children of all ages.

MOTTO:   Always remember that what you think is what you are in life.  Always be the best.  Supreme way has no hindrances.  – Grand Master Robert A. Trias