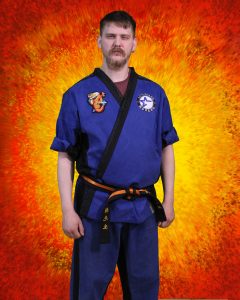 OTHER CERTIFICATIONS: AED and CPR certified

I have been in Security for the NFL on field as a runner (aka the person to tackle people who jump onto the field) and guard for MVP’s and celebrities at the games.  In my free time, you can find me either reading a book, fishing or practicing my Kendo (Japanese sword sparring).

I am also trained in numerous weapons such as Chinese fan, broad sword, straight sword, staff, three sectional staff, and chain whip as well as a number of forms and styles. The weapons and forms were taught to me by great martial artist, such as Wu Bin, (who coached and trained the Chinese Olympic Team for a number of years as well as trained a number of students such as Jet Lee and Jackie Chan) and Martial Arts Hall of Fame, Master Jerry Cook.  I am currently training with Master Kraig Hollingworth and the Toushi Kan Martial Art Institute.  Master Kraig was inducted into the United Martial Arts Hall of Fame in 2013.

In class, I teach weapons such as Chinese staff, broadsword, nunchaku, and fan. I also teach forms, such as Hung Gar (Animal Kung-Fu), Northern Cannon Fist, and Southern Shaolin styles that I learned from Mark Steuver, who is the first North American to train within the Shaolin Temple in China.

Weapons and Kung Fu forms are all great arts to master and I do enjoy teaching it, but my main focus is to teach self-defense, street smarts, anti-bullying, stranger danger, and still have fun doing so.

I enjoy working with children, helping and guiding them in class and passing my knowledge onto them, just as my teachers taught and guided me. My art and my teaching is not just a pastime, but a way of life for me.  It is my pride and joy, as I have much faith in what I am teaching.